About a month ago my wife and I started kicking around small business ideas that we thought sounded like fun.  We wanted something we could potentially do together with me running the books and she running the front end.  A slew of ideas came and went, lists were made, lists were destroyed.  In the end we settled our sites on opening up a small tabletop gaming cafe.  It seemed like it could be a good idea.

So I got to work on a business plan.  I began gathering information on leasing retail property, business structures, permits, food sales, cover charges, build outs, decoration, taxes, salaries, net investments, return on investment estimates…  Just thinking about it all makes my head spin a little.  But I like this sort of up front work and really jumped into. 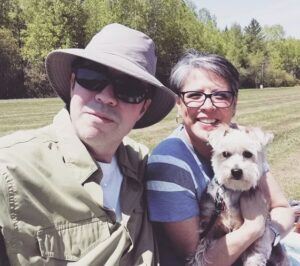 Me, the wife, and our dog Asgard.

On paper a tabletop game cafe looks like a good business with some steady growth potential.  Board games over the past 20 years have become a billion dollar industry, with each year increasing about 8-10% on the previous.  Capitalizing on that trend makes sense, and it is no wonder that tabletop cafes are popping up more and more.

As nice as the numbers on paper looked there was one thing missing we needed to start up a tabletop cafe; the money.  I was crunching down numbers that indicated start up costs between ninety-thousand to one-hundred thousand dollars.  That figure included a full year salary for my wife, a full year of lease/rent, advertising funds, an unknown cost fund, the build out of the cafe (tables, chairs, decorations, POS system, coffee and snack station, pizza ovens, several hundred games, refrigeration, dish washing, and more, etc…etc…

Because we didn’t want to use our home as leverage on a loan, and because we are total chicken-shits, we took a step back and looked at just playing more board games.

Did I mention before that I really do not enjoy playing board games?

It’s true.  I really don’t get into playing board games that much.  However, I do enjoy watching other people play games and the interaction between friends and family that can occur.  Watching people play is more enjoyable to actually sitting and playing, at least to me.

Despite my lack of interest in actually playing board games, I began playing more board games.  I also started watching YouTube and people who would put out videos of the tabletop games they would play.  It was a lot of fun, playing some and watching more.  Mostly watching and thinking about the game mechanics built around the various games.

Then I got an idea.

We Can Make A Game!

It occurred to me; why not make tabletop games of our own?  Maybe we could even publish them and make some money, or maybe not make any money at all.  Either way we would build something together and have fun with a new hobby as husband and wife… and dog.

Over the course of a week or more the wife and I sat around kicking out some game theme ideas and researching the many types of games being made.  I also purchased a couple books from Amazon on tabletop game design.  On top of that I began to research prototyping, manufacturing, distribution, and the many nuances of finding a publisher or going it alone.  Luckily I have some experience in online marketing and sales and have worked often with various manufacturers (none in the gaming industry, but some experience is better than having none at all).

The more I looked into tabletop game design the more I wanted to give it a try.  Not as a serious business, but rather as a hobby… a new hobby for me and my wife… and our dog Asgard.

The wife and I decided to make it at least somewhat official and work under a business name.  It took a few days trying to think up a name we both liked, and in the end we settled on naming it after our yorkiepoo, Asgard Longclaw.

Along with nailing down a name for our indie game-dev hobby ‘business’ comes creating this website and some social media sites.  You can find us on Twitter and on Instagram.

We are currently kicking around some ideas for a new board game that we want to design together.  I also have a side project already in the works – and I’ll write about that later.