I was recently digging through a few old boxes in my garage that had some various items from my childhood.  I really don’t have much of anything that I kept from way back in the mid to late 80s, aside from some old notebooks and pictures.

As I was digging through the box I pulled out a few of those old notebooks – they were full of short stories I had written.  I always enjoyed writing, even though I have poor spelling and grammar.

One of the notebooks I found oddly curious because I totally forgot about it.  It was full of notes on a role playing game (RPG) I was trying to make at age fourteen in 1987-88!

I never really played much tabletop RPGs.  Sure, a few friends and I back in our early to mid teens tried messing around with D&D off and on and a few other RPGs like Twilight 2000 and Top Secret, but they never took hold.  In fact I’m pretty sure those games we did try and play we were playing all wrong and contributed to our lack of interest in playing them.

What RPGs I did play, and play a lot of, were those I was able to play on my Commodore 128 (in C64 mode).  A few computer role playing games (CRPG) really stand out for me back in the day, but two in particular were; Legacy of the Ancients and The Legend of Blacksilver. 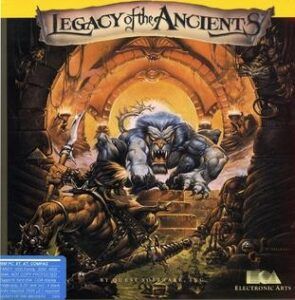 After having dabbled with Advanced Dungeons and Dragons and then having played and won Legacy of the Ancients on my Commodore 64, I jumped into trying to make my own pen and paper RPG.  How hard could it be!?  Hahaha…. yeah, right.

That little RPG creation from back in the late 80s really brought back some great memories.  While I never finished making that RPG, I recall having a lot of fun creating the game mechanics.

So here I am and I already have about fifteen pages typed up in Word on a new outline for a pen and paper RPG I am creating.  It will be Asgard Gamewerks first published creation.  So stay tuned.  I hope to have it complete by the holiday season 2019, just a few months away.

Yes, it will be fantasy themed.  Yes, it will be a very simple and fast paced game mechanic system.  I’ve been working on it for a few days now and having a blast!