Start Your Own Indie Tabletop Game Business: Part One 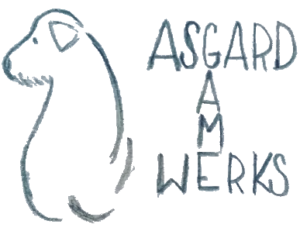 If you enjoy playing tabletop games you likely had thoughts about designing and making your own board game.  For me it started with having an idea for a quick and easy card game.  As I fleshed out the game mechanics and theme my mind started to think about getting it made and then published.  That led me to think about starting my own indie tabletop game business.

Before too long the my wife and I were working on names for our little game development company.  That’s how Asgard Gamewerks came into being.

As I write this blog post we have a few games in various stages of design and development.  One of them, Mint Tin Treasure Hunter, is about to become available for purchase.  It is a very exciting time for both the wife and I.  I thought it might be fun to share what steps we have taken along our journey as indie tabletop game designers, developers, and soon to be publishers.

All the information below is based on research I had done when starting to make games.  The process and flow worked for me and can work for you but of course feel free to adjust things as needed for your situation.

What do you need to do to start your own tabletop gaming business?  It usually starts out with an idea for making your own game with intent on sharing it with as many people as possible.  Then thoughts of art, layouts, mechanics, rule writing, forming an LLC or Sole Proprietor, taxes, then income, and dreams of quitting your day job and being cool like Steve Jackson of Steve Jackson Games.

Before long you’ll have a mess of questions swirling in your head and possibly a feeling of being overwhelmed.  Don’t get too worked up.  The entire process of making a game and forming an indie tabletop gaming company is not that complicated.  It can be complicated, but only if you let it get the better of you.  There is work involved, to be sure, but overall it’s not that difficult, and it doesn’t have to be expensive.

You can actually find a lot of information online about how to go about starting your own gaming company.  As I write this post I will certainly provide some links to various resources.  However, for the most part I am going to share with you what I did to start Asgard Gamewerks.  Along the way I will also share information on designing, developing, and publishing our first game, Mint Tin Treasure Hunter.

Focusing On A Business Entity Or Game Design?

I am writing this blog post based on my situation as a single/sole proprietor of a start up indie tabletop game company.  If you are planning to start a game company with known associates and friends then you may want to think about forming an LLC.  That being the case you should check the laws of the State in which you live on how to proceed.

If you are a sole proprietor or sole household like my wife and I you can jump right into worrying about game design and put the business entity aspect on hold for the time being.

Before I started worrying too much about having a company formed I wanted to make sure I had a viable game I wanted to make.  I didn’t want to get to far ahead of myself by spending money on forming a business entity until I knew without a doubt I had a foundation for the business; a game to make, promote, and sell.

Early on I focused on game ideas and design.  You may want to do the same.

There is a process to making tabletop games.  You can find a plethora of information on how to go about building a game up from scratch online.  In fact you can easily be overwhelmed and confused by all the information that can be found on this subject online.  I know, it happened to me early on in my research.

There are even college courses that you can take on the subject.  However, for here and now I am going to give it to you in a simple breakdown and how I have been doing it with the handful of games I have in various stages of being made.

In the sections below I am going to go into a little detail on each of the bullet points above.

The Game Idea Or Ideas

My idea list I put together early on had about a dozen possible games on it.  From there I picked a couple to work on and flesh out further. 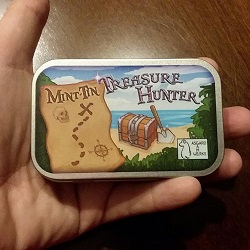 Mint Tin Treasure Hunter, prototype made at The Game Crafter.

One of the games on my list was a treasure hunting game.  I thought it would be cool to collect relics, rarities, and other treasures and compete against other players to see who could collect the most over the course of a game play session.  This game turned into Mint Tin Treasure Hunter, Asgard Gamewerks’ first completed game.

What treasures?  Relics?  Rarities?  Loot?  How do you collect them and how can you beat the other players at the end of the game?  Those questions and many more needed to be answered which meant I needed to start thinking past the game idea and move onto game design.

Tabletop game design is all about the game’s soul.  This is the part of a tabletop game’s life where basic ideas of how the game works, the mechanics, come into existence.

Mechanics are the rules and procedures that the players of the game follow and adhere to over the course of playing the game.  Games have been around a long time and there are many different types of game mechanics in existence. You can find a highly detailed list of mechanics on the Board Game Geek website by clicking here.

As a game designer it’s through the mechanics of the game that you establish how the game is ultimately played.

For Mint Tin Treasure Hunter I came up with card drawing, revealing, dealing, collecting, and passing (card drafting).  Players build up points through the collection of treasures displayed on cards.  They can also lose points by getting stuck with cursed treasure items.

Once you have the game’s mechanics figured out you can move onto game development.

Game Development for tabletop games is where the game comes to life.  This is where the actual game play and theme are finalized.  It’s also where the game’s parts are established and clearly defined; things like cards, dice, tokens, meeples, and more.

Things like ‘placeholder art’ might be sketched or even purchased, rule documents written and rewritten, and a rough prototype created.  At this stage there is also going to be some internal play testing done to test the game’s mechanics in tandem with game’s pieces.  Game flow is put to the test.

Development for Mint Tin Treasure Hunter was easy.  All I did was buy some blank playing cards and proceeded to draw and sketch the various types of cards I needed to play the game.  I played a few hands of the game by myself using the mechanics I thought up.  Then I played a few more hands with my wife and family members.

Guess what?  With my home made deck of Mint Tin Treasure Hunter cards and a solid outline of game play mechanics…  Hot-damn, I had a game of my own making!  It was rough and ugly, but it was a working game and it was mine, all mine.

Self Publish Or Find A Publisher For Your Tabletop Game

At this point in your indie game company and game creation process you need to make a very big decision.  Do you want to self publish your game or find an established publisher?  There are many people out there that just design and develop games.  They then go on to sell their games to various publishers.  For some it’s a hobby, but others are able to make a career out of just doing game design and some initial development.

There are many reason why you may want to self publish versus find a tabletop game publisher.

Finding a publisher in itself can be a hard time consuming process.  You will need to essentially sell your designed and semi-developed game idea to somebody else.  If you can find a publisher willing to take on your game then they are the ones to finish fleshing it out.  Until you are an established name in the game designer community, you may find it difficult to sell any game you design to a publisher.

But that doesn’t mean you shouldn’t try if that’s what you want to do.  The marketing, manufacturing and distribution of tabletop games is an entire business unto itself.

Pros & Cons Of Using A Publisher:

Pros & Cons of Self Publishing An Indie Game:

I decided to self publish.  My reasons were few and simple.  Mainly I wanted to keep creative control.  I also was doing this as a hobby and not intending it to be a life changing career.  Also, learning the entire process from the initial game idea all the way to getting the game into the hands of the user was of interest to me.

Conclusion Of Part One

This is the conclusion of part one of my Starting Your Own Indie Tabletop Game Business.  Deciding to self publish or find a publisher is a huge decision and may determine how you proceed from this point on.  You will need to do some research and soul searching.

Moving forward to part two of starting your own indie tabletop game company I will delve into the remaining bullet points above not yet covered.  I will mainly be disusing starting your business entity, social media, play testing, first article prototyping, manufacturing, and distribution.

Once again I would like to add that everything  I am covering is how I did it so far with my little indie game company Asgard Gamewerks.  What has worked for me may not work for you.  I do hope that everything I share will be of some benefit to you the reader.

I would love to hear any thoughts and comments below.  You can jump into Part Two here!